I love the original Milkdrop visualizer a lot, but struggle with the old fashioned plugin, which started working unreliable recently and causing constant crashes for me nowadays.
Right now - I just found Butter Churn Viz (https://butterchurnviz.com/)

"Butterchurn (2018) is a web implementation of the original source code of Milkdrop released on the WinAmp forum in 2007."

Immediately I tried to find a way to use it with / respectively getting it implemented into MusicBee somehow.
Since it can be displayed in a browser natively, I just wonder if it could get loaded/displayed into MusicBee as a Website somehow too ...

"Butterchurn v2.6.7.1e-complete (2020-08-20) is easy to implement with example webpage and extended functions and implementation manual."

There exist a Butterchurn Chrome Extention as well.

Otherwise, it's maybe just an inspiration but also a reminder to focus the attention again onto a very beautiful aspect of musical enjoyment - Visualization - and the support of these kind of plugins.

Steps to reproduce :
1. MB Visualizer is set "Milkdrop 2.2"
2. Press "V" to start visualizer
Result: "Window resize failed" > MB crash
(there is no difference when set to "Fullscreen" or "Normal" (tab))


This behavior did never happen 2 or 3 month before and unfortunately I can't say if it is now caused by a recent ...
- MB update
- Windows update
- AMD Adreanline driver update

Any one here who is facing the same issue too or already has resolved it ? 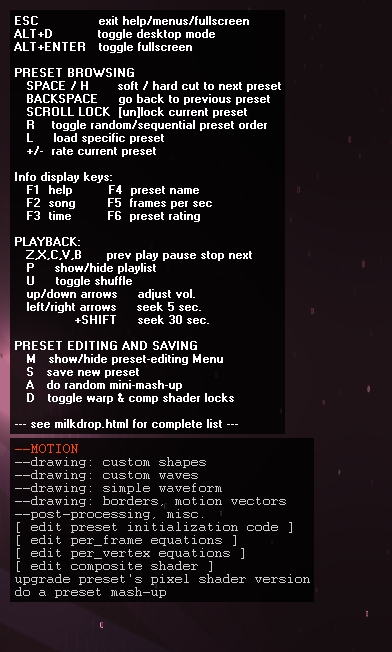 As far I remember this menu should work with using the cursor keys and enter to select.
At the moment I'm unable to navigate and select any entry in this menu.

Could this be checked please?

Thank you and greetings.

I'm using a multi screen setup with an beamer. Sometimes I'm experience the situation that MB open dialog windows on the second screen (the beamer) which is off usually. These dialog windows obviously does not represent an separate window instance, so they can't be focused either moved between the screens with WIN+LEFT/RIGHT keys. In this situation you HAVE TO switch on the second screen (the beamer) to manually drag'n'drop the dialog to the first screen where the MB window is located.

My wish is that MB open dialog windows AUTOMATICALLY on the screen where the MB main window is displayed/located.
Implementing an option therefore would be welcome too.

Thank You in advance.
Greetings.
5

« on: April 28, 2019, 02:02:45 PM »
I would like to suggest implementing a function to open the current displaying Artist picture in an separate window by double-click on it.

Currently this is already implemented for Album Artwork to view it enlarged, but this action doesn't work for Artist artwork unfortunately.

playlist issues seem to be a very frequent problem when it comes to sync a mobile device with MB. I'm sure there are plenty of reasons why somethings went wrong or simply doesn't work. One reason obviously is the huge variety of different devices, OS's and apps that support only different formats or simply have a very own strategy storing or handling playlists.

I decided to start a new thread here because to me it seems it could be a good way to sum up some basic knowledge about how Android devices handling playlists. So I hope this thread can keep seperate and will not be merged into a existing one.

Because I use an Android (6.0.1) device in connection with the Smasung Music App, I will focus on this setup in the following.

During testing the new MB WiFi-sync feature, I've experienced playlist sync problems again, even though it still work fine through MTP sync. So I've just started investigating and testing some things to find what's probably going wrong, respectively why my Android device has problems with synced playlists sometimes and sometimes not.


Problem 1:
Playlist files seem to be discovered totally random by a media app like Samsung Music, if copied (manually) to any folder on my device. Most times they seem to be never discovered by any music app.

Problem 2:
Playlist sync via MB WiFi-sync doesn't really work. Playlist files are transfered corretly and the Samsung Music app display them too, BUT the playlists shown in any media app are all empty - so they can't be used! To avoid any misunderstandings, the m3u files are totally intact and containing the correct paths to all media-files.

+ Android uses an own internal media scanner, which builds up a database about all you media-files and also playlists. This database should be loacted somewhere here in most cases:
- /data/data/com.android.providers.media/databases/external-{some hex here}.db [or]
- /data/data/com.google.android.music/databases/music.db
I'm unsure which database is used under which condition, but that shouldn't be important here.
+ Music Apps like Samsung Music and others I suppose, just using this Android media store database.
+ Most times new files or playlists can NOT be discovered by any media app, just because the Android media scanner did NOT YET detect them!
+ I'm unsure which events will lead to initialize a rescan. Anyhow, the Android media scanner can be triggered MANUALLY whith apps like these here:
"ScanMediaPlz" https://play.google.com/store/apps/details?id=net.zhuoweizhang.scanmediaplz
A few seconds later after you getting run it, you should find the playlists shown correctly in your media app, if they wasn't there before.
+ As long MB weird MTP-sync is used, the Android MTP handler always directly updates the Android media store database, so a rescan is unnecessary.
+ MB Wifi-Sync does/can? NOT use the Android MTP handler so the Android media scanner will be called by the app right after sync process is finished.


What I have observed:


I hope, I could bring some light into the topic for a few of you.


The most important goal, however, should be to make the synchronization reliable and robust for everyone. That would be awesome.

Wifi Sync definitely seems to be the way forward here!

Please also correct me if I made wrong statements here and there.

Thank You in advance,

I would like to suggest prevent automatic lyrics retrieval for tracks with Artist = "Various Artists",
just in case it isn't already working like that.

Here are some reasons why it make sens from my view:

- IMHO it can be considered that ALL automatic identified lyrics for above described tracks are incorrect
- if "auto-tagging" > "auto-retrieve missing lyrics for the playing track" is enabled, wrong lyrics are saved into these files

Thanks for any consideration.

I've discovered a minor but somehow disturbing issue with the thumbnail size (setting) and thumbnail vertical space in the Artist view.
If you use a MB layout like mine below, you preferably would like to have the SAME thumbnail SIZE and SPACE in every view.
Because currently this isn't possible - especially because of the size-fixed radio station thumbnails - it's almost impossible to set the hight of the files- and now-playing-bar in that way, that the same count of vertical thumbnails PLUS the belonging text below always is visible in each view. 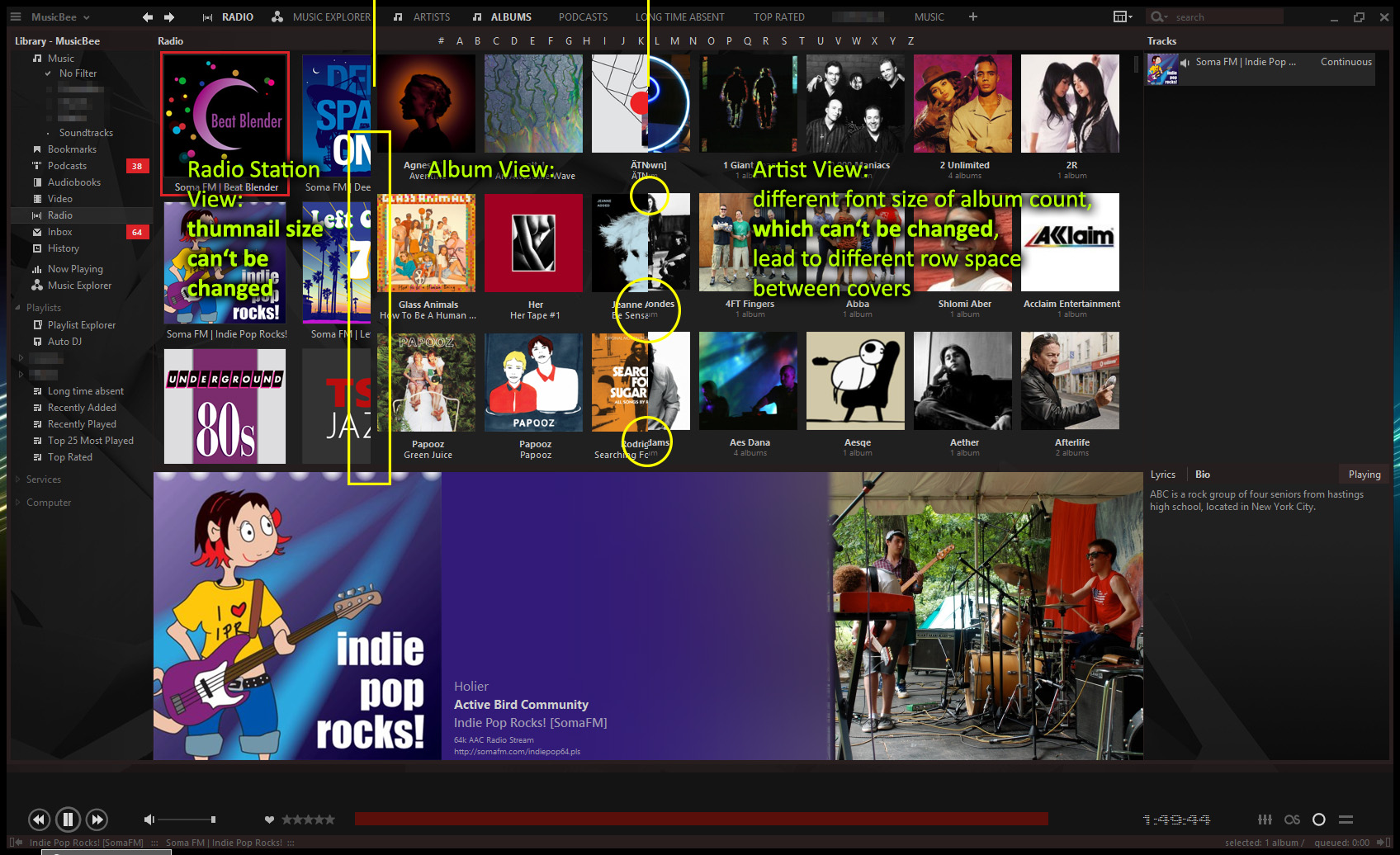 1. It would be nice to being able changing the Radio-Station thumbnail size.

2. Due to the size-slider, available in some header menus, isn't shown a precise value (px,%,...), I think it could help to have a central setting in general settings for being able to adjusting the thumbnail size for ALL VIEWS (Album, Artist, Radio Stations) TOGETHER.

3. It would be nice if the Album-Count text size in Artist View beneath each thumbnail could be changed too.


Thank you in advance for any consideration.

if MB is configured to run an embedded visualizer, it isn't possible anymore to run an additional one outside of MB in a separate window - like milkdrop.
Now everyone will start to ask: why this should be possible? Does it make sense?

Well, let me explain why it could be a great feature if MB is able to run 2 visualizers in parallel.

Currently I use a Visualizer called "Classic Spectrum Analyzer" embedded in the MB GUI - located in the bottom: 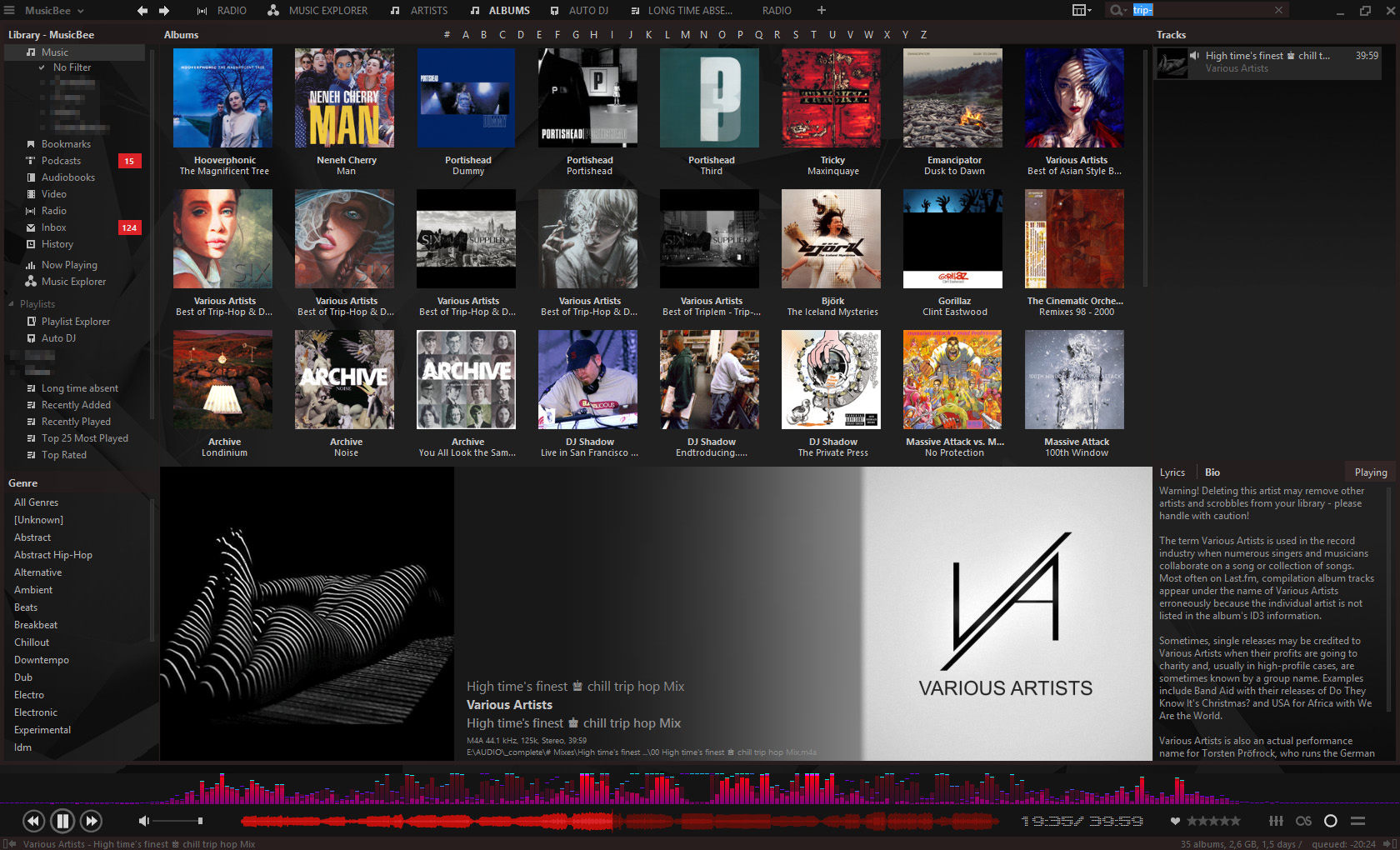 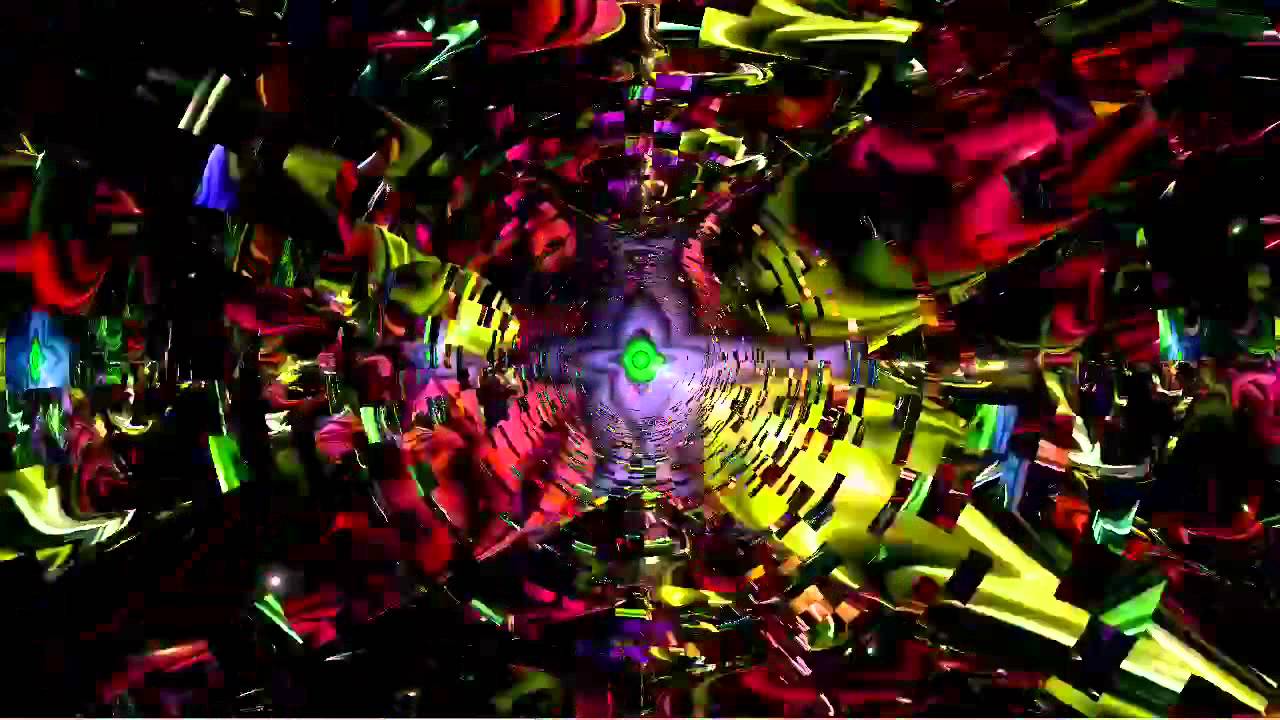 More infos about the "Classic Spectrum Analyzer" can be found here:
https://getmusicbee.com/forum/index.php?topic=23345.0

Currently it's still impossible to run a "real" graphic visualizer like Milkdrop in parallel to an GUI embedded one.

This is frustrating a lot

So, it would be VERY WONDERFUL if there where an possibility to run an external visualizer plug-in simultaneously and in addition to an GUI embedded one.

Thanks for Your attention and support.
Greetings
10

I've recognized an visual glitch when radio stations became cover images assigned which are in the png-format and containing transparency. The problem comes to bear in the radio station list. Stations with transparent png-covers showing another radio station cover from the list underlayed.

Hope this can be fixed.

recently I've update from MB 3.2.6666 to 3.2.6679 and currently using 3.2.6684.
I've recognized that the adaptable color gradient background in the NowPlaying bar disappeared.

I wonder if that was intended?
If so, I think that this is a step backward in terms of a beautiful interface design.
If not, I really hope it cant be fixed and look like before in MB 3.2.6666.


Thank You and Greetings.
12

Questions / How to replace a the Unknown album artist Artwork?

I'm sooo curious about: How to replace a the Unknown album artist Artwork? 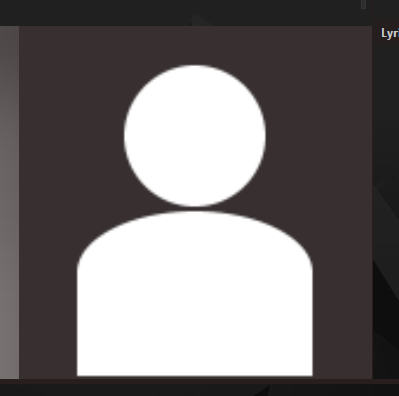 I've not found that image in my .XML skin file coded as Base 64 - ore anywhere else.
I wonder that it may comes from flickr.com and can't be changed?

Any Ideas? Than You in advance.

I'm experience a problem with radio station covers (manually assigned) displayed as album artwork in the "Now Playing Bar".
It is wrong almost every time, or even completely disappear.

This problem persists already since about 2-5 months over many builds - not sure anymore when it appears the first time. 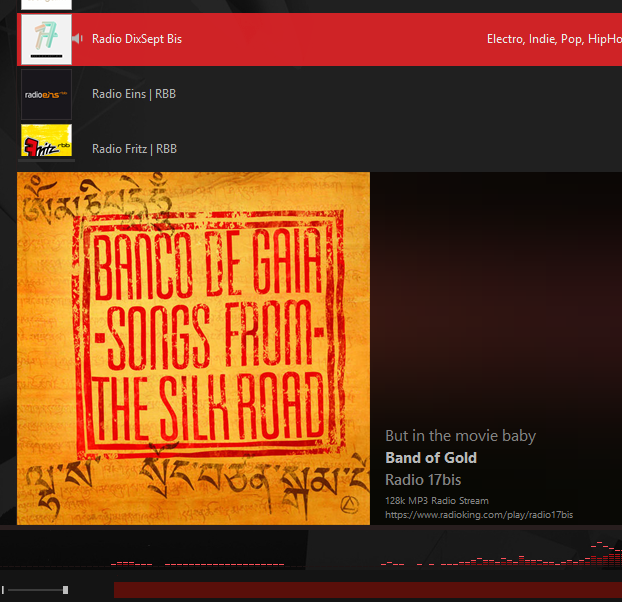 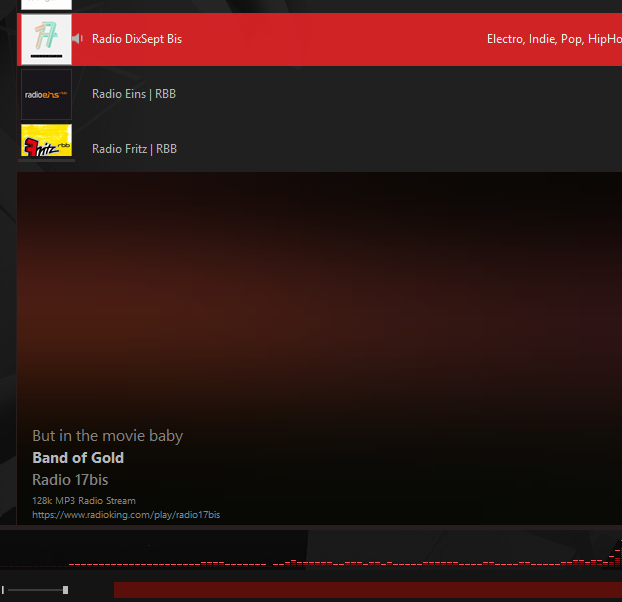 I would like to suggest two things to add/change in the Musicbee GUI:

2. Adding a space on the right side of the "now playing bar" in the same width as the scrollbar above, to get an better visual alignment.

... please have a look in the following screenshot: 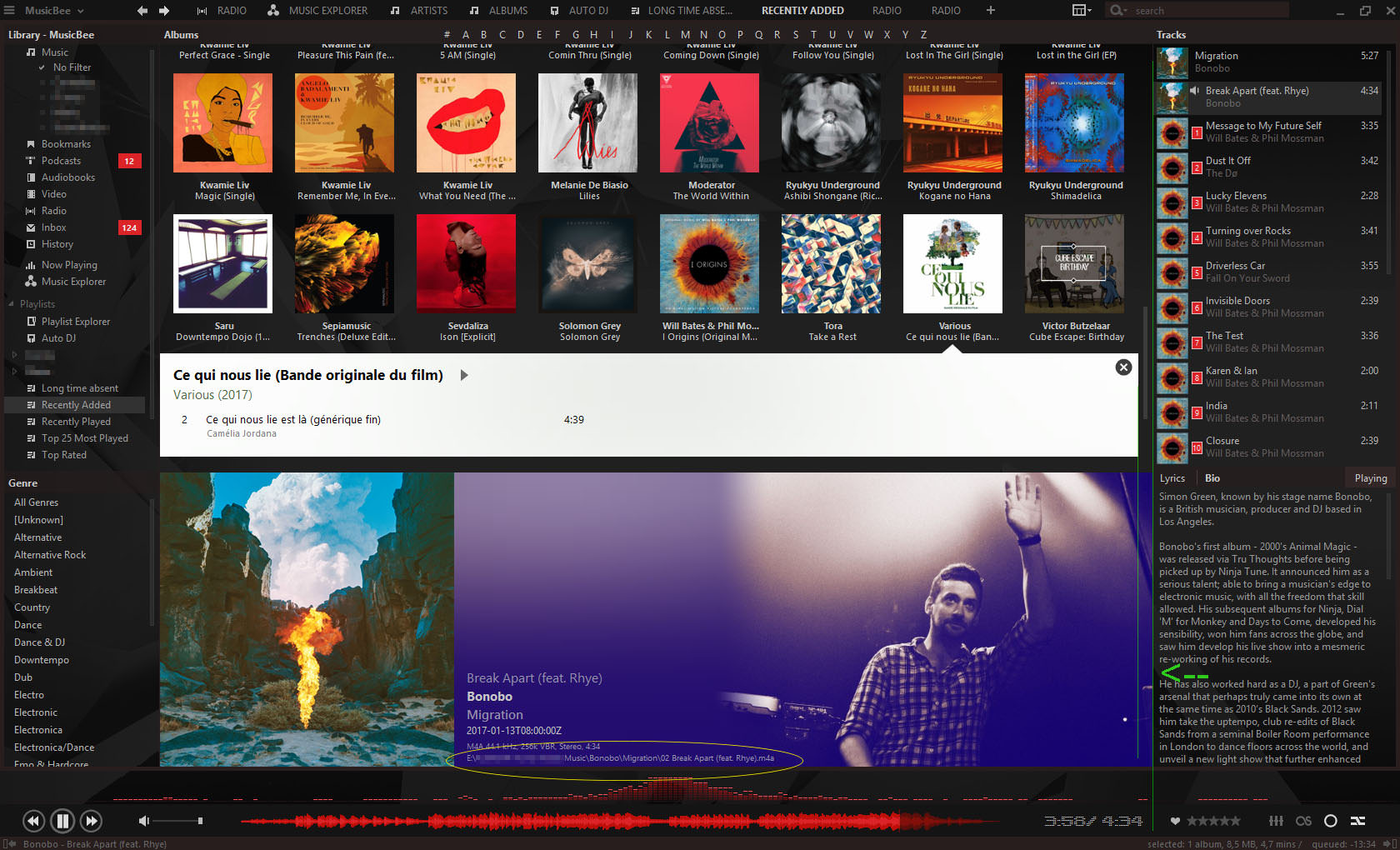 Thanks for the attention.
Greetings.
15

could someone give me a hint if and how it's possible to get transparent panel borders?
Which element(s) are needed to be edit in the xml-skinns?

The borders are currently just less visible above the background image in my configuration, but i really would like getting rid of them.

Thanks a lot in advance.