Questions / How do you view the other covers / pictures in an mp3 or flac?

I can't figure it out.. when I edit the mp3/flac I see only the first photo and using the drop down there does nothing although, when I try to leave the song it thinks something has been edited and I have to decline modification.
17

- I noticed that for sure that if the song will appear the next time I add files to the inbox, that is is missing from the music section (I'm not sure if this is always the case but I have confirmed that it happens at least some of the time, but I assume that it is probably all of the time)

- after noticing the song was missing, I did a rescan (pressed ins) and then the file re-appeared in the inbox. Even though it was originally dragged (when adding files to the inbox, after editing the tags, I always CTRL+A the files in the inbox then drag them to the music or audiobooks tabs)

Questions / Why does the left panel with the header "Artist" sometimes show album artist?

but with some books, it will show the "Album Artist" tag instead, even though the Artist tag also has a value (which is different than in Album Artist)

Does anyone know why this is happening and how to fix it? (to show the artist tag for every album I mean)
19

« on: May 05, 2022, 10:36:59 PM »
here are examples. these are a bunch of audiobooks series I've been adding. All the songs with similar albums belong to the same series. The odd one out is the straggler that popped back into the inbox and had been added previously and dragged to audiobooks and had disappeared from the inbox when initially it was dragged.

each image is after i've cleared out the inbox (moved them to audiobooks tab) then added a new folder of files consisting of a new series (and the highlighted file will be the straggler from the previously added series). I captured screenshots in order, so you should be able to see how there is one file from the previous batch each time as a straggler. 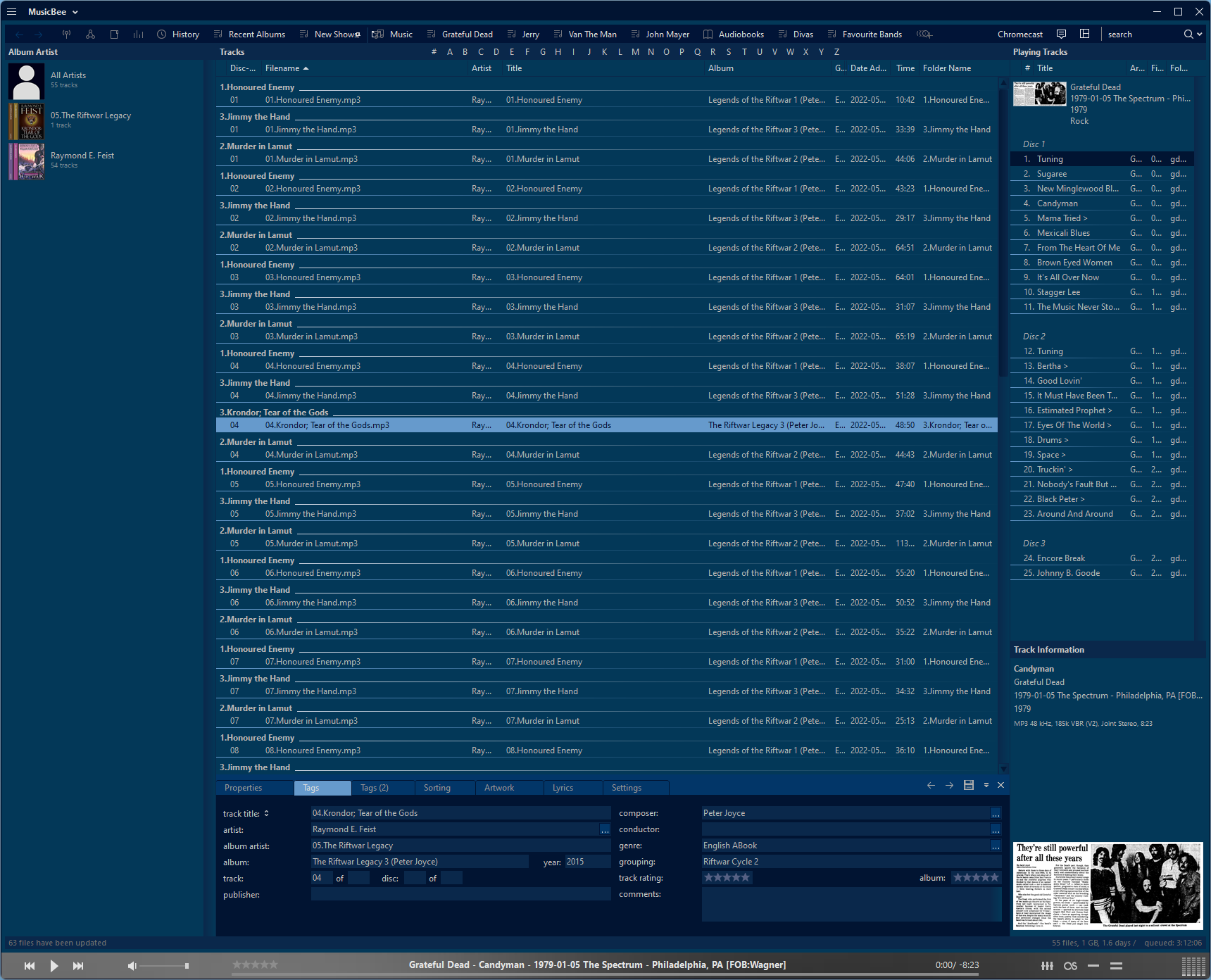 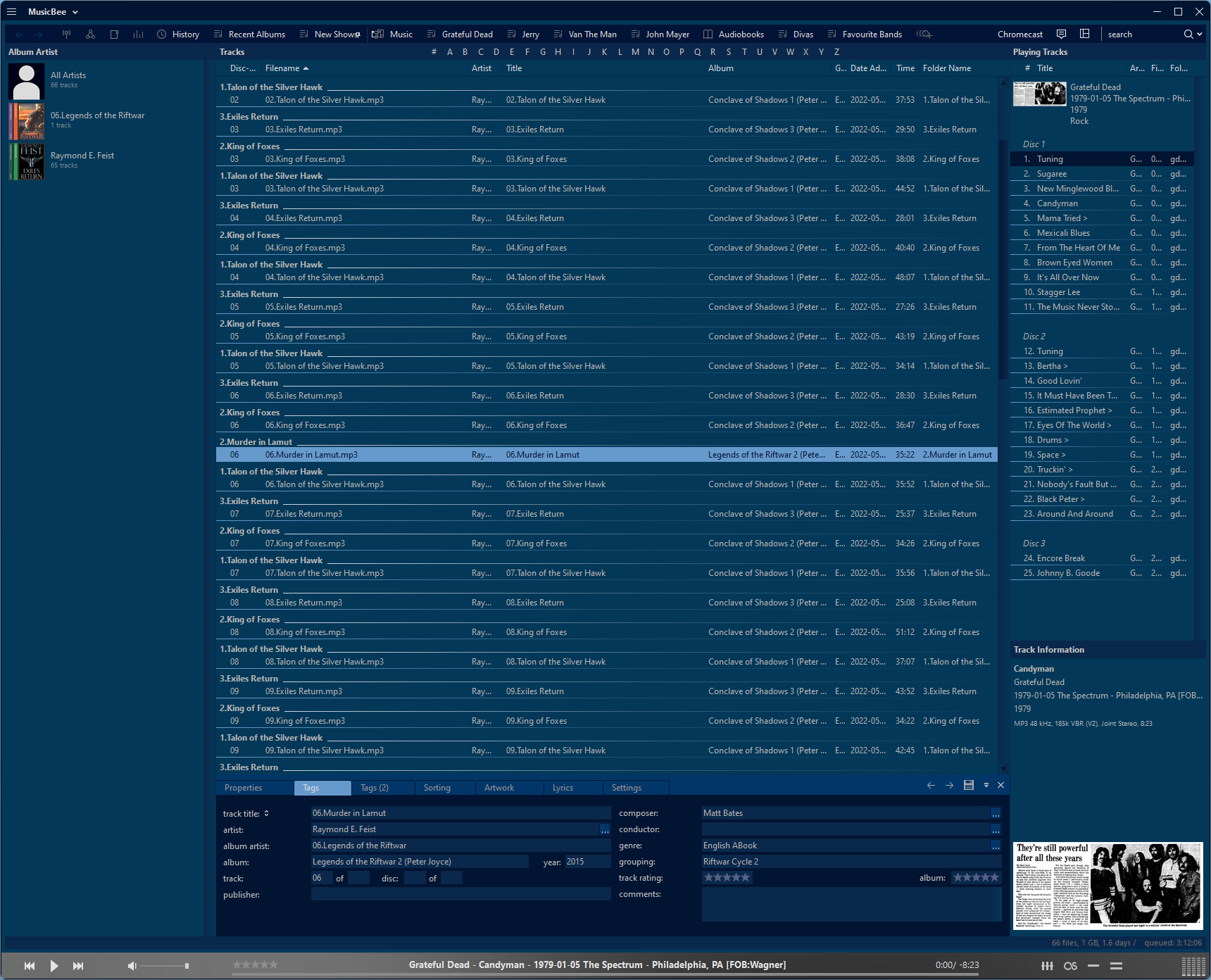 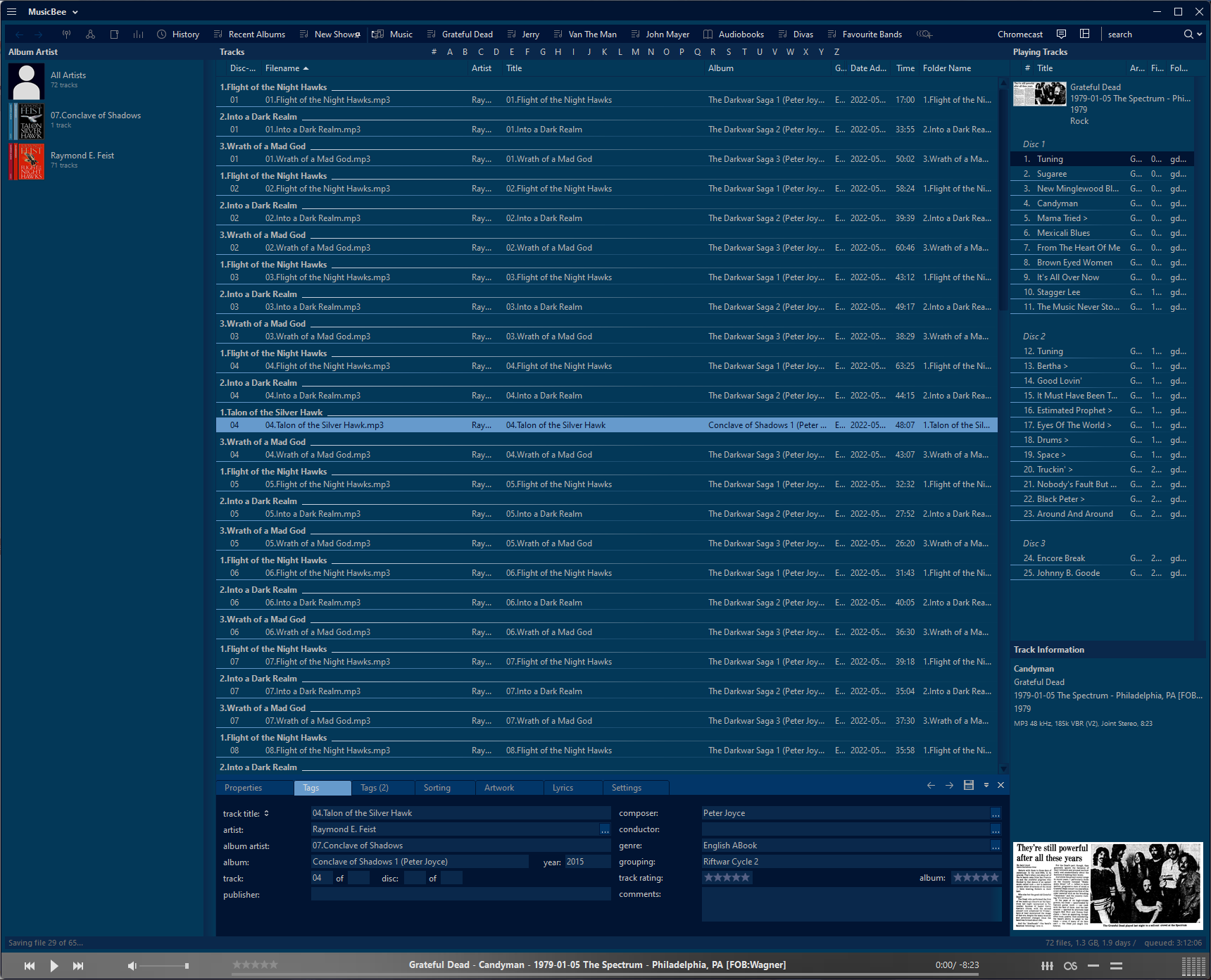 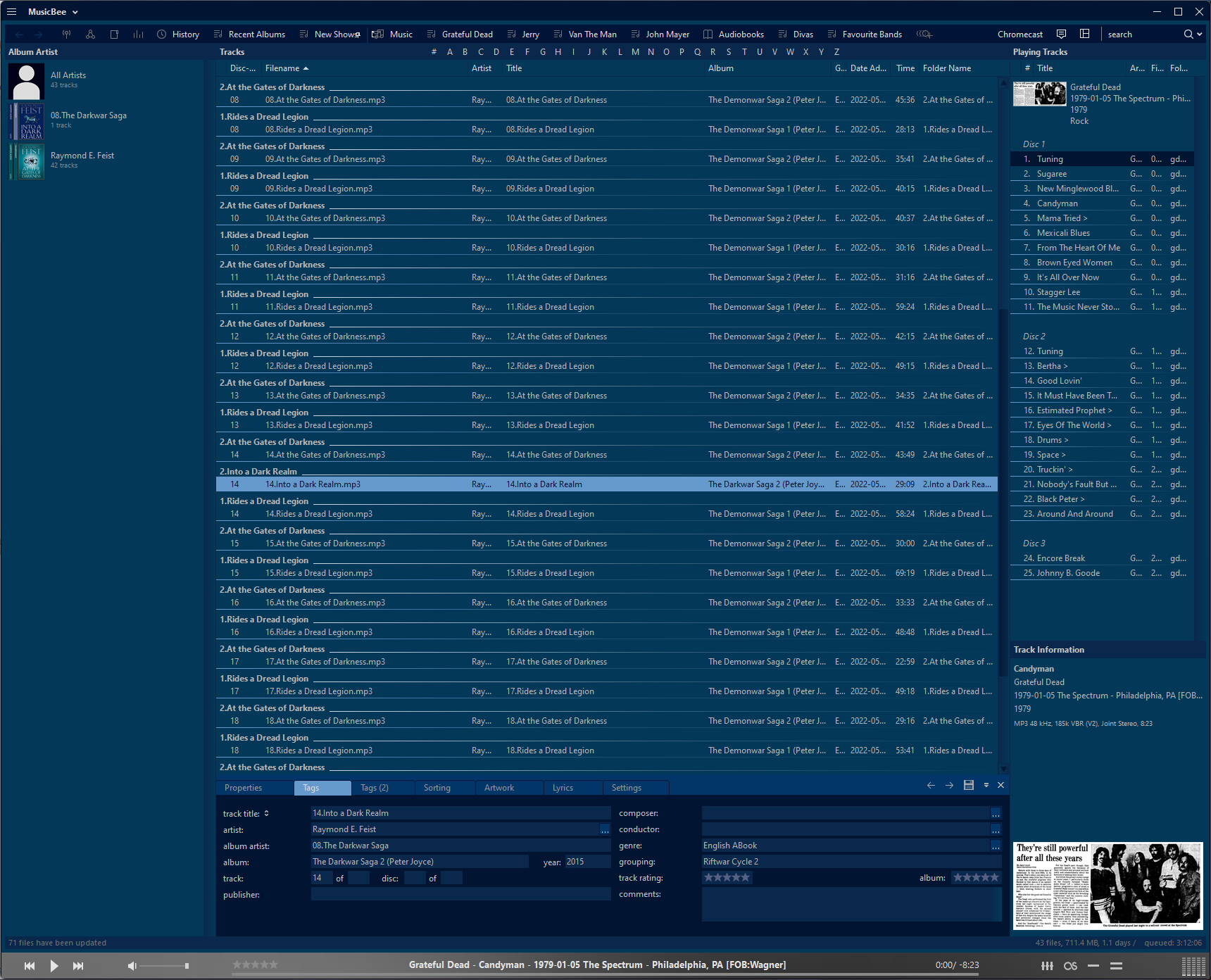 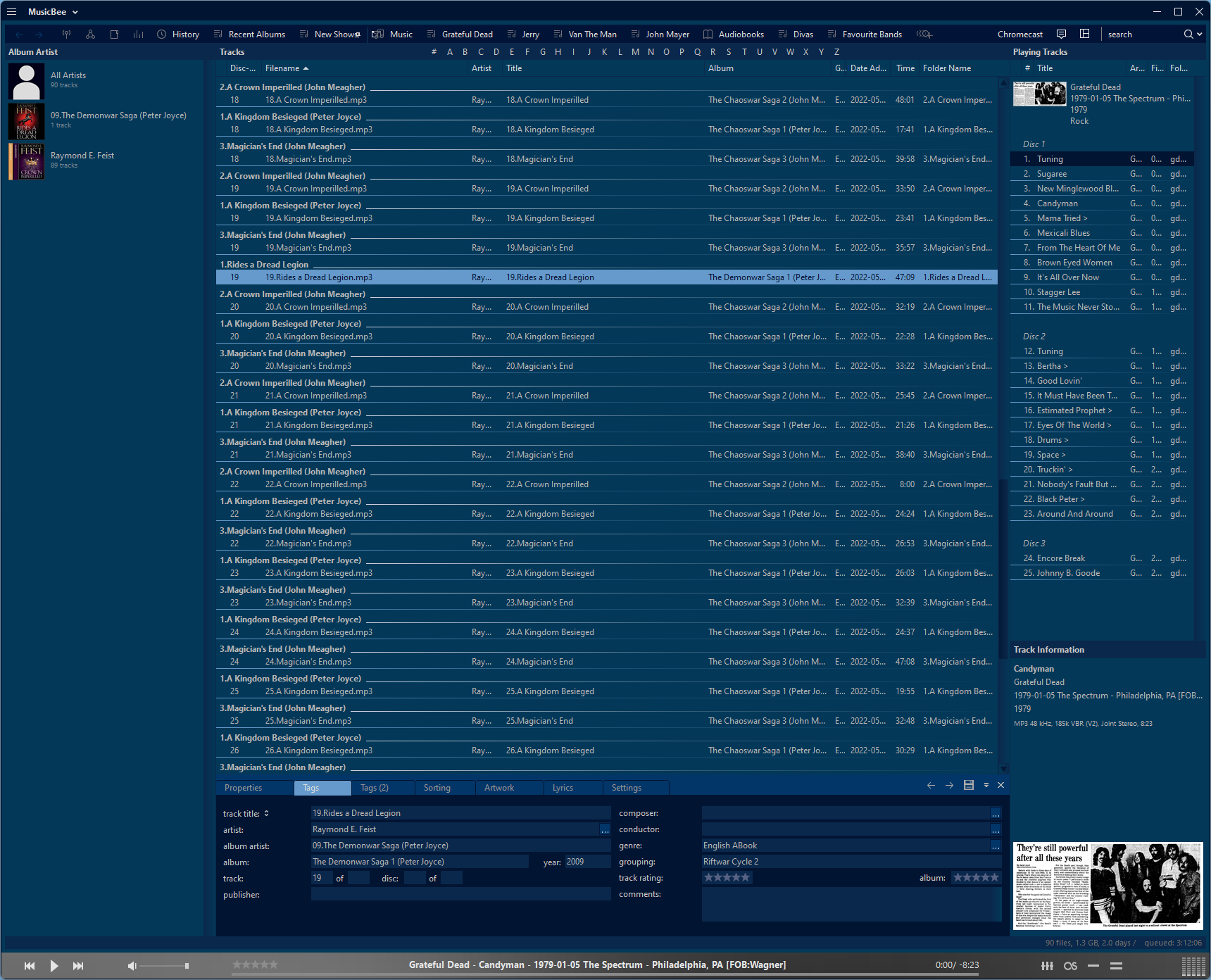 to be clear what I mean: look at the name of all the non highlighted albums to determine the name of the series, then look at the next photo and you will see the straggler has that album name because it belongs to the previous batch. you can do that starting from the second photo as the straggler in the first photo is from the previous batch which I did not take a screenshot of.

It has happened for as long as I've used music bee. It is not something new.. many years old.

I drag files to the inbox.. then I tag them and drag them off to either "Music" or "Audiobooks" tabs

they all disappear from the inbox.

Then more often than not, when I drag more mp3s into the inbox, one (and only one) straggler will reappear in the inbox, along with all the new files.

I cannot be sure if the file ever appeared in the moved location before popping back into the inbox. I think so.. as I don't actually scrutinize each song's name, I do sometimes look at the track numbers.. and would notice if a song is missing.. what is for (fairly) certain is that any tag that is applied to the album in the moved to location (music or audiobooks libraries), including photos, will not be applied to the mp3 file when it pops back into the inbox.

I stress that there is only ever one straggler that pops back. I have seen this happen hundreds of times. There is never more than one. Also it is sometimes possible for 0 songs to pop back into the inbox the next time I add mp3s there. However once it starts happening, most of the times I add songs will result in a straggler popping back in from the previous batch of songs added.

I always (100% of the time) will update some tags, usually in batch edits, of songs that I drag to the inbox when I add them to the inbox, before dragging them to the Music or Audiobook tabs. I wouldn't have mentioned this except I read that the OP mentioned that he usually edits tags.

When I say I drag songs to the inbox, I mean from outside of MusicBee as a way to add them. I cannot remember if stragglers can appear when adding songs through scanning the library, which is a method that I sometimes use as well for adding songs to musicbee.

update: yes it happens on library scan as well

update: I can confirm that after I drop an album in the inbox, then drag it to the music folder... then in the music folder select the album and paste artwork, that when the straggler appears in the inbox later it will be without this artwork. I am still not certain if the file was actually among the files in the album I selected or was missing. But for sure the straggler was not at that time visible in the inbox. So this might mean that the file is actually left in the inbox and just not displayed for some reason until the next time files are added to the inbox.
21

« on: May 05, 2022, 02:25:04 PM »
Hi, would be great to have the comment as a tooltip. I found various requests in the forum about long comments... but from what I read and what I can think of there is not really a good solution to it, except if it popped up in a tooltip when you hovered over the comment box.

For it to be effective as a tooltip, the tooltip would need to stay displayed as long as the mouse is not moved, as comments can be very long.

one might wonder what use a long comment is, it probably isn't for regular albums. But when it comes to concert recordings they are oftened accompanied by very long info files with a lot of pertinent information regarding the source and edits, which I and others put into comments, as well as interesting things about the performance like which songs special guests played on and such.
22

You can assign hot keys for the first 9 Internet Links, however it is not possible for the 9th through 14th.
24

Tips and Tricks / Re: How to add or remove a tag from multiple files, leaving the other tags intact.

So I just copied the dropbox out the url in the warning page and decoded it. Then I was able to download the preset rar.. just in case anyone else has this problem.
25

CTRL+BACKSPACE deletes only one character a time in a tag field, it would be useful if it could do entire words.

Sometimes it also does delete the entire first word, then switches to one character at a time mode.
26

This is a hard one to explain. For example I'm editing the album tag, and I press CTRL+DEL and it does delete the first word as expected. However, the subsequent presses won't delete the next words, instead they delete one character at a time.
27

Tips and Tricks / Re: How to add or remove a tag from multiple files, leaving the other tags intact.

Questions / Re: My Various Tagging Questions

Questions / Re: My Various Tagging Questions