Questions / Re: mp3 tagging - text field entry suggestions. Can I delete them?

Not sure if it is pulled for tag suggestions but is easily overlooked.

Questions / Re: Why does the artist's name appear twice next to the song title?

Where under the title it lists either the multiple split out artist / guest artist etc and if none are there just the plain artist tag.

Make the most basic Virtual Tag: MB> Edit> Preferences> Tags (1)> Define New Tags
Name one of them something, for example I did "PlainTitle" type in there <Title> 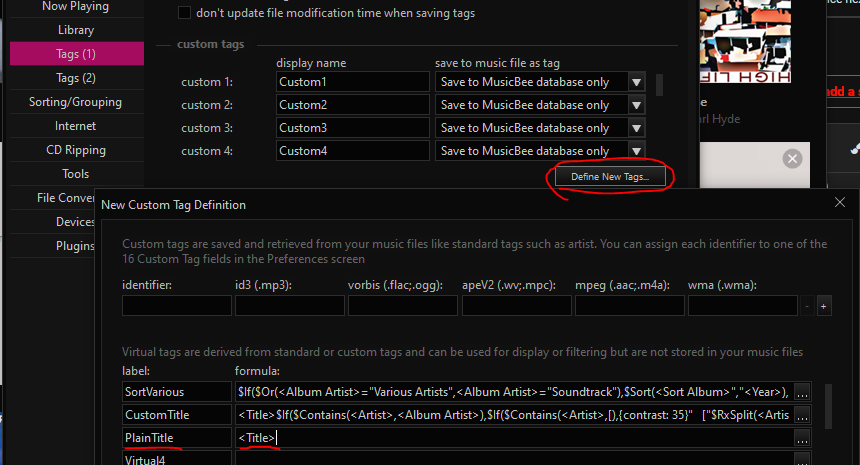 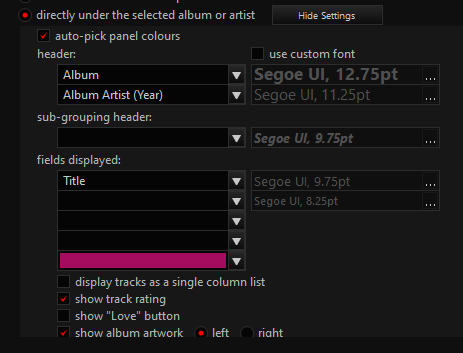 But this time change the top field to your new virtual tag [PlainTitle by example] then choose Artists for the next field, that should do what you want.

[Update/Explanation] You were right to point out that it only happens when the <Artist> tag didn't match the <Album Artist>, by default the title detects the mismatch and displays it, the virtual tag we made get's rid of that function and just displays the track name, thus getting rid of your duplicates. Only dug deeper into some of this stuff a couple of days ago.
3

« on: September 02, 2021, 10:50:12 PM »
Late reply cause finding time is hard. That functions page is a bit sparse when coming into the code world cold, was using it with my experimenting before.

My bad, should of given more context, at the same time didn't want to just dump my problem fully onto the community, difficult balance =]

Full outline of my tagging wish: To display the <Artist> when it differs from <Album Artist> (eg Various Artists, Soundtrack) but when the difference is minor like a featured artist or a remix to only display that difference, that way it's more likely visible before truncation. 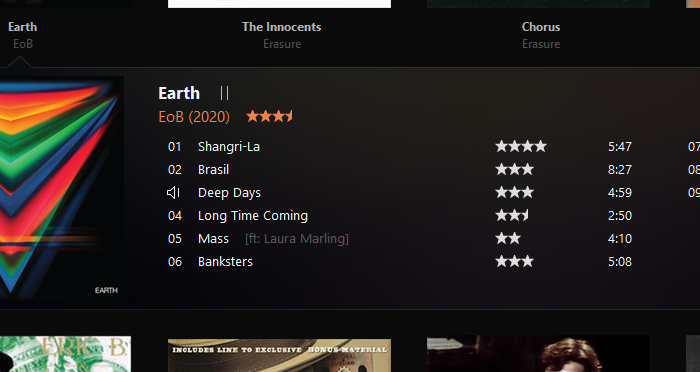 Since I consistently use square brackets for my featured artists or remixes this makes it a good split point like you helped me initially, but I needed to add the ability to display the full <Artist> in cases where they differed for whatever reason from the <Album Artist> so a good example would be VA or Soundtracks* (which I use as <Album Artist> to group Soundtracks). 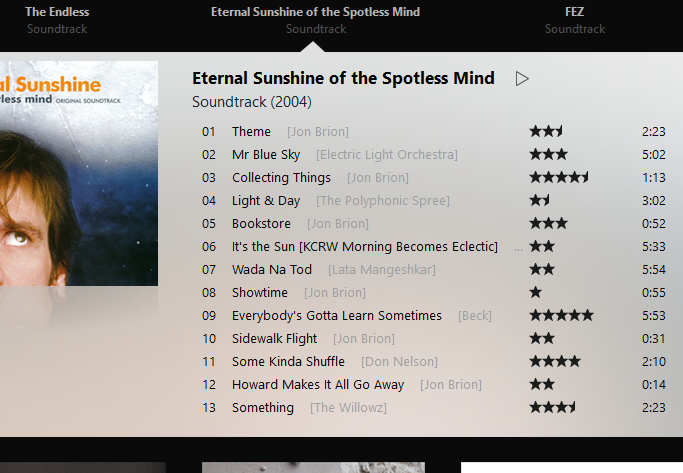 This is the same functionality as MB defaults, I just needed to add this back in without causing duplicates where a square bracket might be used.

I'm only doing comparative jobs on <Artist> and <Album Artist> boom boom, I'm fussy about my labelling but that amount of precision is beyond me (impressive but daunting, meant as a compliment ^^)

These screenshots show how I do want the titles to display, I got it to work but it feels messy.
Code
If <artist> contains <album artist>
(T) if <artist> has a "["
(T) display text from after that "[",
(F) display nothing from <artist>
(F) display <artist>

Thanks again, if I get a reply pointing out something to neaten it up I will, might post a tips post about this with area's denoted where it might apply to their tagging scheme and also a sorting virtual tag with mention of users like yourselves who basically did the work / heavily guided me if you guys aren't opposed?
4

« on: August 31, 2021, 03:31:49 PM »
Wow! That's great, um is there a more comprehensive listing of commands / syntax for virtual tags? So my library is consistent [mostly] but there are more cases than just featured artists, eg remixes or just album artists being various or soundtrack where this falls apart. Does virtual tag support something like a CASE instead of IF?

I played with it a bit and did essentially 2 more if statements following yours [one for splitting out rmx: and another for <artist>!=<album artist>] with the obvious pitfall of repeating in cases where multiple criteria were met. I figured actually something along the lines of

Code
If <artist> doesn't match <album artist>, display everything after the matched text. Issues maybe when there is no match?
Doesn't work anyway, RxSplit wants an actual string, so then I tried something more messy

Code
If <artist> doesn't match <album artist> but does contain it, split <artist> after the amount of characters in <album artist> display that.
I was hoping Left might return number of chars and Split might use that as a value, silly really.

Code
So I tried a sorta nested If, but that fails to compile at the end of the statement "@ ist>"]"),)

Is there an inverse to $Contains? A command to return amount of characters in a tag? A way to $Split by position / number of characters?
Super to know this is possible, thanks for the help!
5

« on: August 31, 2021, 01:55:31 AM »
proph, that would be altering the actual info in the tag, don't wanna do that as it just removes the artist name in the now playing / scrub area / other devices.
issue is over readability and redundant-ness... also my library is a bit too large to manually go through.

What's the non-compact view? I really like the album cover layout when outside of playlists so doubt I'd change for it. Yah I'll +1 that, thanks for the replies guys. 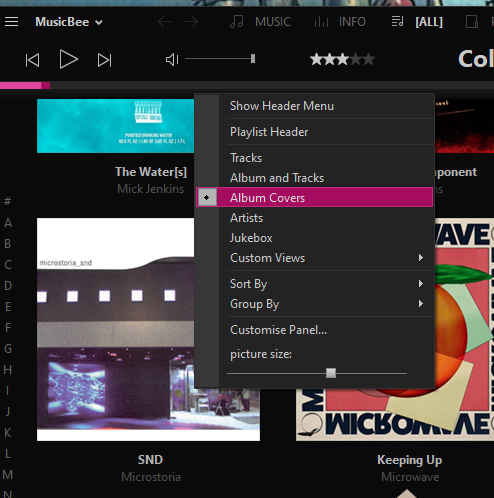 Questions / Changing how 'artist' is displayed on album cover view?

« on: August 30, 2021, 09:41:38 PM »
Albums with featured artists used in the <artist> tag display the full string, any way to detect the matching artist bit and only display the difference?

Don't want to alter the actual text of the <artist> tag, just the display, is this doable with virtual tags or something, even just being able to remove the square brackets "[ ]" surrounding it would be nice since I like to use them for [ft: artists]. ^^
7

Questions / Re: Why does the artist's name appear twice next to the song title?

If you want help finding it through the edit > preferences menu

which is quite buried, or just 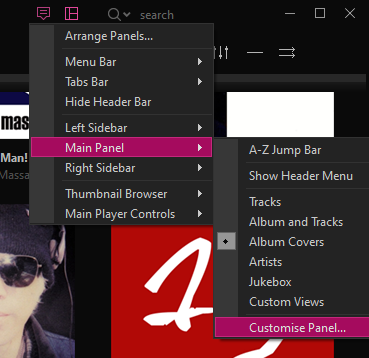 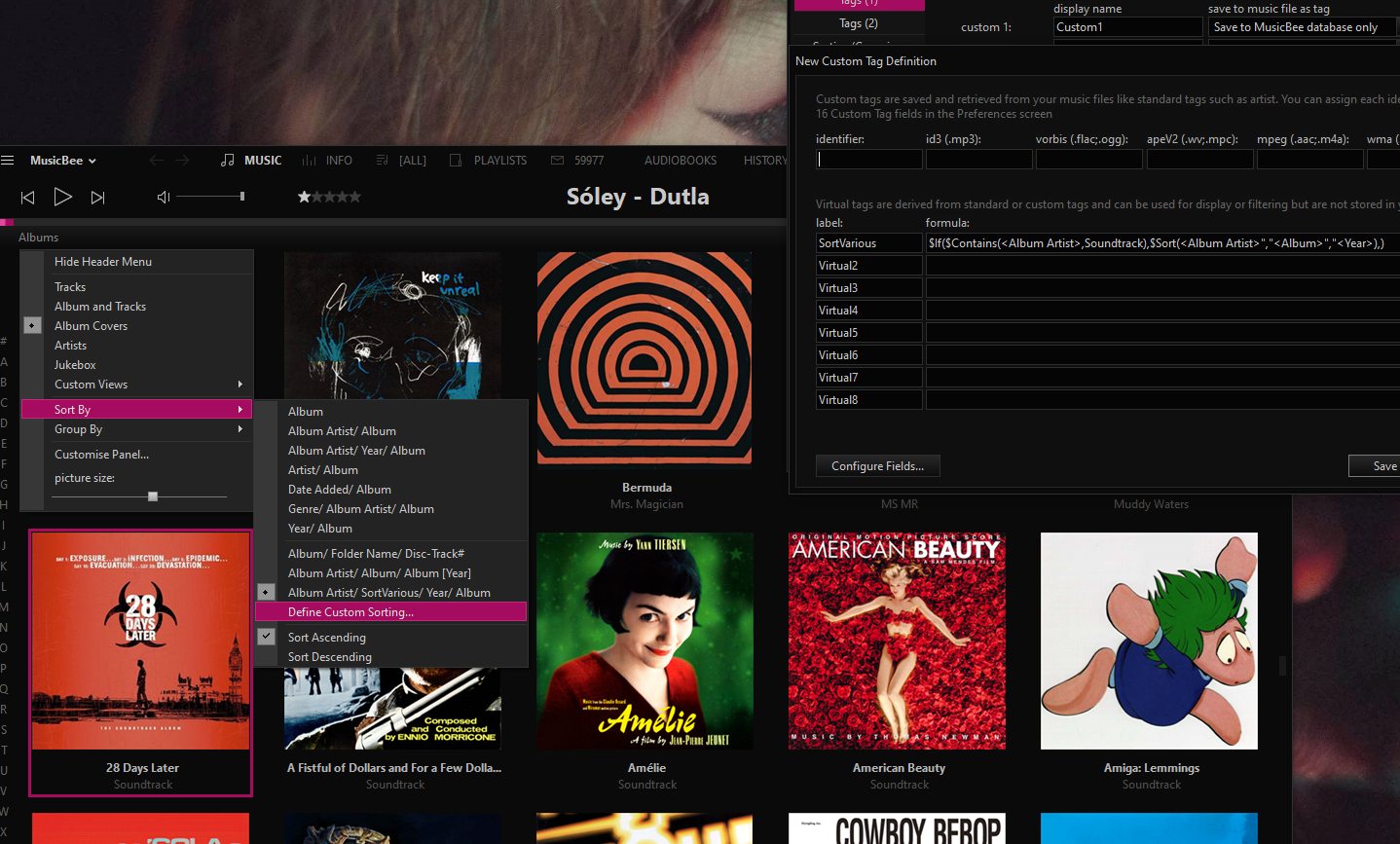 « on: August 29, 2021, 09:25:36 PM »
Godsend! Thankyou, didn't realise you couldn't automagically write to custom tags.
<SortYear> tag was made as I was experimenting, but my standard <Year> tag's are in order.
Had the Custom sort defined like yours, just using the custom tag which wasn't being effected.

Only added the false condition to make sure I wasn't missing some syntax.
Your solution is much neater and is exactly what I wanted to achieve, will do a variation of this with VA also, thanks again!
11 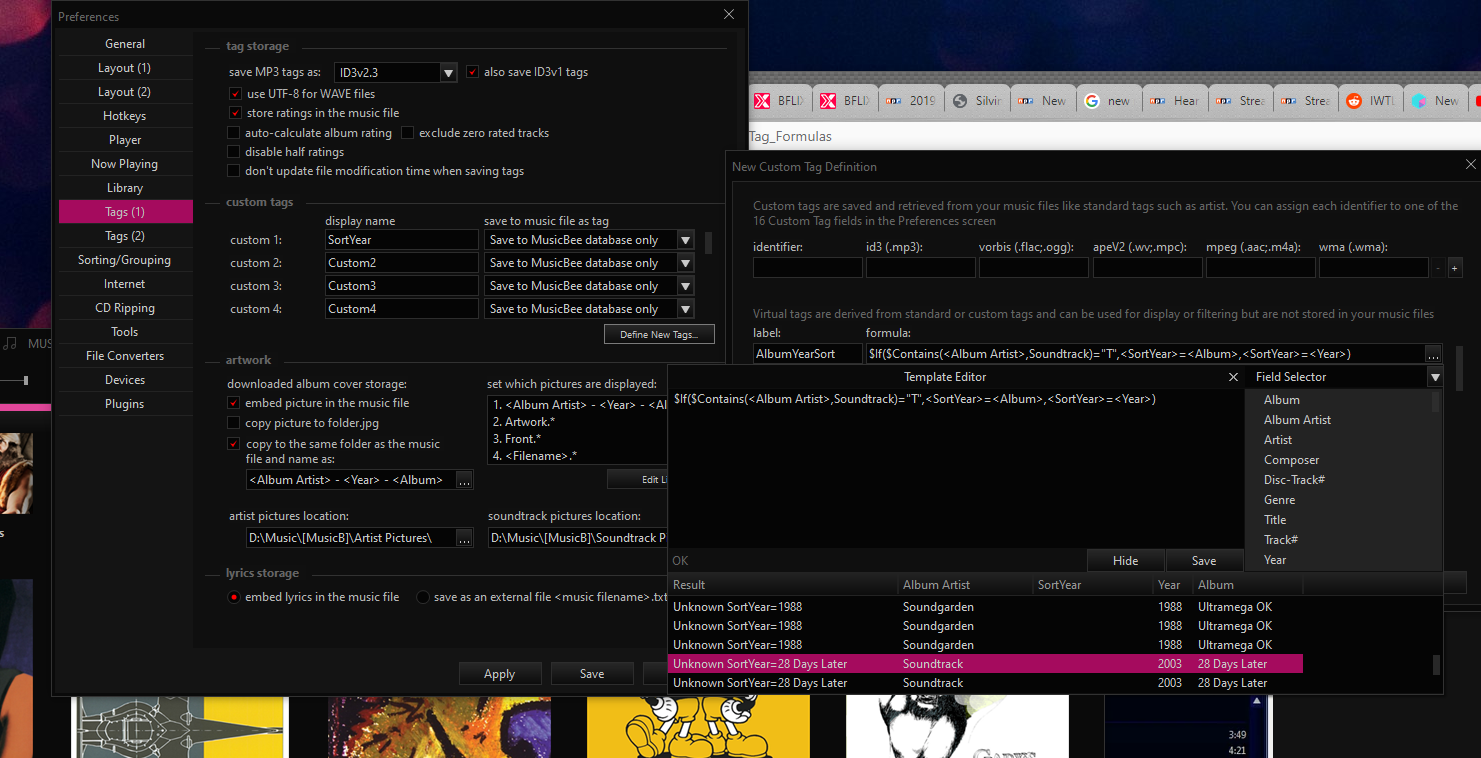 Both preview the same, yet don't actually write anything to the custom tag <SortYear>, is this just doing a comparison function, how do I write data to the custom tag? Is it the replace function? I'll probably remove the false action and leave it null when it works.
12

So I want to keep all my music sorted by "Album Artist > Year > Album" except one artist, let's define as 'X'.
For X's album's I want to order them by "Album Artist > Album > Year".
X's music exists with all my other music from artists 'A' to 'Z', only their (X) albums are organised alphanumerically before chronologically.

I'm not sure there is a clean automated way to do this. The "enable custom sort values for individual artists...' looks like band A = B for grouping purposes.

« on: August 28, 2021, 10:29:59 PM »
So my regular Album Cover's view is sorted by Album Artist > Year > Album, which is great BUT for any soundtrack stuff.
I separate any OST things since I rename their album artist to "Soundtrack" so they all live together.
Now this probably isn't possible but I'd like to 'conditionally sort' or something akin, so for any album artist which matches "Soundtrack" it would sort by Album Artist > Album > Year without disturbing everything else. Would be helpful for anything under the umbrella of 'Various' too. Am I just crazy or is this achievable?
14 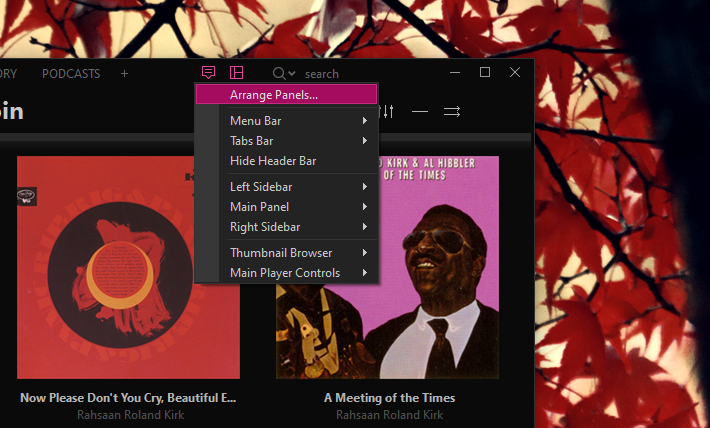 MusicBee Wishlist / Re: Add "Volume Leveling" to the list of auto-playlist rules / filters.

Boroda, yes this would of been helpful, had i known of the option. Other devices still may use the replay gain info though.

Hiccup, yes that was my intention just to find all effected files to adjust from one location. virtual tags do allow for filtering "track gain" and i could of made that to make a playlist. Useful for future hunting down of gain adjusted files.

Zak, ha that is buried! Actually it is the opposite of what i was attempting but would allow me to custom tag or flag these, still that's a nice list of things in "Files to Edit" that i didn't realise had a built in option to surface.

In the end [before seeing these replies] i just made a playlist of my library and inbox, added "Track Gain" as a displayed field then sorted by it, selected all effected files and ran restore original volume. It was about 2k+ of tracks affected and was simple enough to do.

Imo all of these solutions [including mine] are a bit of a work around considering the auto-playlist feature allows for almost all metrics to be considered and it's available as a choice when creating custom tags. I still think my suggestion stands as fair [as it seems relatively simple, but i may be wrong].

Out of curiosity the function is referred to in 3 different ways if i'm not mistaken "Volume Leveling" in track properties, "Replay Gain" in some preferences and as "Track Gain" in fields. I can imagine confusion for some users [myself included] if they all all relate to the same setting. Thanks again people, once again such minor nitpicks from me. Cheers =]
Pages: 12 3