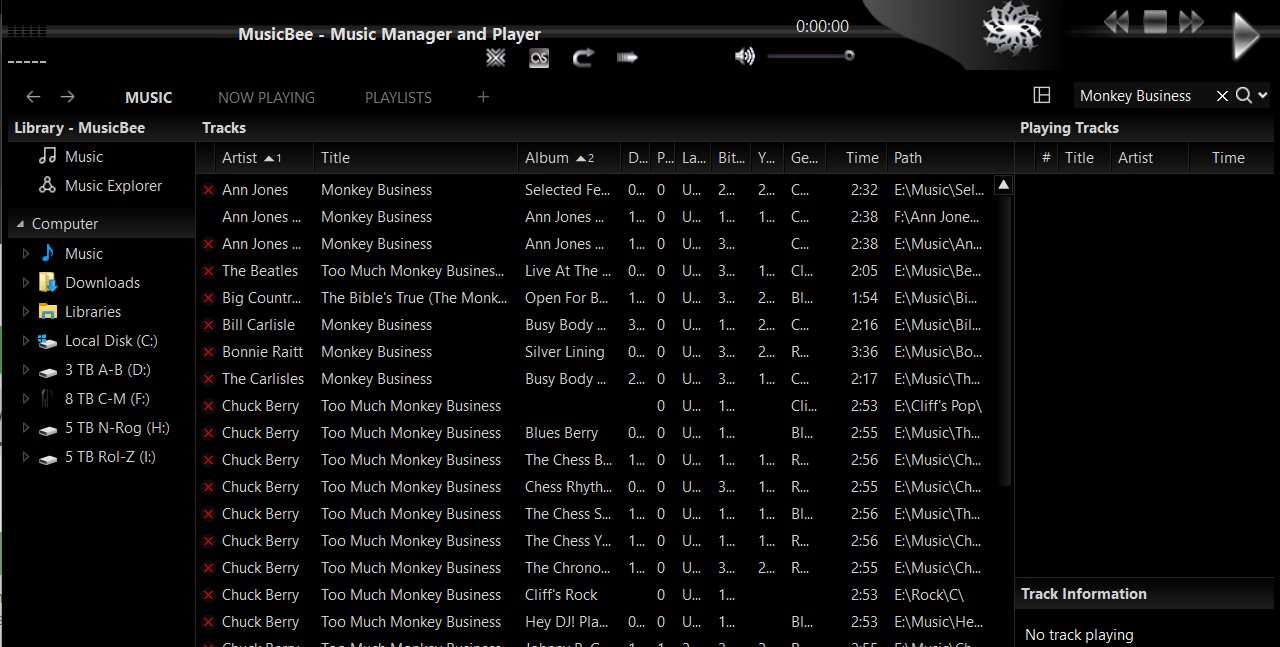 « on: February 15, 2021, 08:42:12 PM »
I am using the Dark Matter skin and find it almost impossible to see the scroll cursor in the main window. This is even after adjusting the brightness on my laptop screen. Is there any way of changing the cursor color or shading? The cursor is supposed to be visible directly below the triangle in the image below.

Any help is appreciated.
4

« on: August 30, 2020, 11:33:15 PM »
I have been using MB for some time and recently has a hard drive crash. My music was on external drives so no loss there. I did not have a backup of my MB settings. I installed the latest version, 3.3.7491. Everything is back to normal except for one panel. I can't seem to remove. I have the library and playlists in the left sidebar. The next panel to the right is labeled "All Artists" and this is the one I don't want. To the right of that are the tracks and then to the right is the right sidebar for "Playing Tracks".

General Discussions / Re: So how big is your music library?

General Discussions / Re: So how big is your music library?

« on: May 10, 2013, 02:14:37 AM »
Currently I have in excess of half a million tracks, just over 525,000 which are spanned across two 3tb external hard drives and backed up to a server just in case. I still have 35,000 more tracks to edit and tag which equals another 300gb. That should bring the total to about 560,000. I still have more CD's to go through and rip as well. Now you may be asking why anyone would need or want enough music that would take more than 3 years to play continuously. This collection has taken me over 40 years to compile (I'm 62 now). I've also been a volunteer DJ at a community radio station for over 4 years. I just grab my laptop and two hard drives and away I go. I spend an hour each show profiling a specific artist doing a complete bio and featuring about a dozen or more tracks from each artist. And if a listener calls in with a request there's a damned good chance I'll have that track. And I listen to almost everything from A-Z (Acappella to Zydeco). The only genres I'm not keen about are opera and rap. But I love techno and trance!

I previously used Winamp but it started giving me problems trying to update the database when I reached about 450,000 tracks. I then discovered MusicBee and it is super fast! It does take almost 60 seconds to load at start and about 10 seconds to re-sort on a column but searches are instantaneous. Thanks to Steven for a fantastic program.
Pages: 1